Minotaurus is a demon introduced in chapter 24. He is the one that was entrusted Cerberus to by Mephisto.

Minotaurus has a very large muscular body covered with dark brown fur he has metal bands wrapped around his mid-thighs and the middles of his upper arms.He wears a pair of black shorts that reach to a little above his knee. From his shoulders up to his back head he has a larger amount light brown fur and the head of a bull with two large gray horns that lay above his ears and two big teeth protruding from his bottom lip of his snout.

Minotaurus is the same creature that roamed the Labyrinth of Cretin and due to his actions for the 200 years before Mephisto and Faust return to the underworld with Su-In and Jin-Woo Cha he was shackled up by the Azazels outside of the underworld unable to return.

He thinks of himself as a strong being while he first fought with Su-In Cha but when Mephisto is around he is treated as a weakling and acts such because he is scared of Mephisto.

He is very strong able to take out many of the devil's that Beelzelbub sent to get Cerberus and only Pient being able to stop him. In the fight against Su-In Cha he removed his horns and put them together making a weapon called the edge spear which is very powerful with it being able to pin down Su-In. In the colisseum battle against the Demon Gerios, Minotaurus also withstood several attacks to deal a one hit blow with his newly attained weapon using his two horns known as Knuckle. 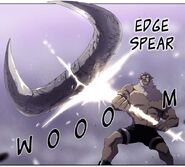 Minotaurus' new Horn weapon he acquired while training with Cherub
Add a photo to this gallery
Retrieved from "https://soulcartel.fandom.com/wiki/Minotaurus?oldid=5181"
Community content is available under CC-BY-SA unless otherwise noted.