Michael is 1 of the 4 Archangels created by God, and is charged with overseeing Hell. He is also known as the Archangel of Ultimate Defense. He is God's most trusted angel and also the commander of the Azraels and Angels.

His appearance is synonymous with that of an angel. He wears white clothes, and high-cut white leather boots. He sports long, flowing blonde hair that nearly touches the floor, and when in flight, possesses shining white wings of light on his back. He is mostly seen donning a long white overcoat that is clasped at the waist, while wearing high collared shirt overlain with a light blue vest, finishing off with a simple blue crystal pendant on his neck.

Being the head of angels, Michael is extremely kind and gentle, and cares for all the beings in both the underworld and the human world.He is also shown to have a mischievous side to him as he takes to poking fun at Archdevil Mephistopheles from time to time. He takes special care of Cha-Shi hun and company, even letting them leave with the Archdevil Mephistopheles. He is shown to have a special fondness for Faust as shown wanting his attention at various points and even becomes depressed when he is rejected by Faust when the latter rejects him giving Faust his crest.

Being an Archangel, Michael is one of the most powerful beings in the Underworld and is capable of using the higher element of light. He is aligned with the element of water, and uses together with light to create Holy Water, which is employs to create powerful barriers capable of repelling the powerful of attacks, hence earning his title as the Archangel of Ultimate defense. A testament of his power is when Archdevil Mephistopheles rejecting Michaels offer to battle him, stating it will only end in a draw, thereby acknowledging Michael as an equal in power. 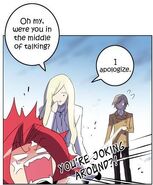 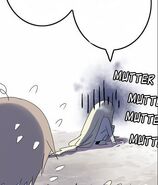 Michael depressed after being rejected by Faust 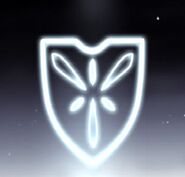 Michael's Crest
Add a photo to this gallery
Retrieved from "https://soulcartel.fandom.com/wiki/Michael?oldid=6362"
Community content is available under CC-BY-SA unless otherwise noted.