Mephistopheles (more commonly known as Mephisto) is one of the main characters of the manhwa and is the first Archdevil shown. He is also known as the Archdevil, or Demon, of Combat.

Mephistopheles is seen to have a rather child-like personality in the series. He has a lot of pride and one of the quickest ways to annoy him is to insult precisely that.

He often does a dance when happy and glares at, if he doesn't pick a fight with, those who annoy him. Being a devil, he has no remorse or apprehending for threatening or even killing others to get what he wants.

He loves to fight, as shown by him often asking both opponents and allies if they would like to fight him, and taunting them when they accept. Due to his power as an Archdevil, he overpowers most of his opponents and hence has a strong dislike for weak opponents.

However, he gets excited when he meets powerful and strong opponents, or those that have the potential to become strong, and may sometimes spare their lives in hope that they'll grow strong enough to fight him head-on in the future.

He hates to lose a fight be it physical, verbal or etc, as shown by his refusal to accept that Faust defeated him in their contract-induced battle over 500 years ago.

Mephisto is most often seen as a child with long red hair and ruby-colored eyes.

He wears a black waistcoat and leather pants with ankle high combat boots. The devil is usually seen with small, bat-like wings that keep him suspended in the air, usually for napping or annoying other people.

Currently, his true form has wings made from the Crimson Flame, an upgrade he aquires mid-battle with Beelzebub the Demon.

His true form is a more mature version of his chibi form wherein he appears to be in his late teens.

Mephisto stated before that he hates using this form because it offends his devil aesthetic as to him, being small and cute is the best.

Hence, he only uses this form to access the full range of his powers to battle opponents he deem worthy, and has used this form to completely overpower and destroy both Nigul the Demon and the Supreme Witch.

This form initially sports black, bat-like wings but these are replaced by wings formed of Mephisto's Crimson Flame after he retrieves the heart that was repaired by Nova Len.

Mephisto is one of the 4 Archdevils, making him one of the most powerful beings in existence.

Mephisto can use "Hell's Resentment" which is a giant sword that emerges from the sky and a hand that is used to control said weapon.

In addition, Hell's Resentment can be used six times in tandem, known as Hell's Resentment: Rampage, along with creating Mephisto's alter ego Asura of Resentment. This avatar is made from the bones in Mephisto's right arm while his blades are made from those in his left, and is seen being able to use a sonic attack emitted from its mouths as well as wield all six blades - this is known as Blazing Onslaught of Fury, which can take down the Supreme Witch's ultimate black magic spell in mere seconds.

Asura's Wild Dance is capable of disarming Beelzebub's Yaksha of his four spears.

Mephisto lost one of his two hearts during a battle with a Pluto, who died as a result. Nova Len, a talented blacksmith in hell repaired the heart and made modifications to make it stronger. But the then weakened heart would have been unable to take the temperature of Mephisto's flames, and so was put in the belly of Cerberos (a three-headed demon hound that Mephisto considers his pet), for 300 years.

The second heart saved Mephisto and brought him back to life after his remaining heart was destroyed by Beelzebub, thanks to quick thinking on Faust's part, and him transplanting the organ back into Mephisto's chest.

This heart made Mephisto more powerful, allowing him to shatter Yasha's Black Spear with his regular hand, when he previously couldn't counter it; the strength upgrade is most noticeable in Mephisto's wings, which are now comprised of the Crimson Flame.

Esoterism Asura of Dark Fire Six Dragons: This is Mephistopheles newest and most powerful form.

Mephistopheles achieves this form by becoming one with the Esoterism. In this form, six crimson dragon heads comprised of Crimson Flames spring forth like fire from Mephistopheles’s back, additional two large halos stand behind Mephistopheles. 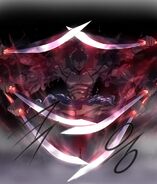 Mephisto sitting on the throne at his residence. 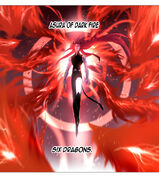 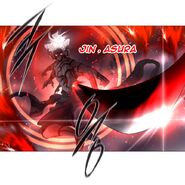 Jin Asura
Add a photo to this gallery
Retrieved from "https://soulcartel.fandom.com/wiki/Mephistopheles?oldid=6439"
Community content is available under CC-BY-SA unless otherwise noted.