Mastema is the third Archdevil introduced to the series. Mastema is the creator of all the Gateways between each of the levels of helland is his job to protect the Master of the archdevils. Mastema was introduced in chapter 99 and was the cloaked figure seen with Beelzelbub during the attack of the 6th Azrael base. He is also known as the Archdevil of Strategy.

Mastema is seen only in his true form which has smaller black horns protruding from his temples, he has light green hair with very light black narrow eyes with black T-shaped lines below each of them. He is seen wearing a green long-sleeved shirt with a black line running down the middle of it and four thinner lines coming out from the line 2 from each side. He wears semi-tight black pants with black boots. He also sports a pair of Black Angel Wings with a slight faded green tint in the center as seen at the beginning of his fight with Michael.

Mastema says he enjoys puzzles and Games rather than fighting like Mephisto Pheles and Beelzelbub. He acts extremely high and mighty and thinks of himself as smarter than Faust which may or may not be the case. Mastema also shows his dark side after the fight between Mephisto and Beelzebub by thinking he has been trying to keep these fights even because if one were to lose he would be the winners next target, meaning all this was for self preservation.

Mastema is one of the 4 Archdevils making him one of the most powerful beings in existence. In addition, he also capable of utilizing the Darkness attribute. He is able to create gateways at will as seen when he makes a gateway for him and Faust to have his battle in. He also makes a bunch of portals to keep Michael from interfering in Mephisto and Beelzebub's battle. He is very intelligent.

As the creator of all the gateways, he can detect any individual who pass through his gateway as well as restore damaged gateway as stated by himself in chapter 99. He also keep gateway record archives of memories of all existing beings in the Underworld. 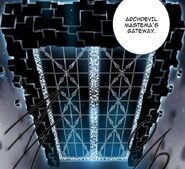 Mastema is reading the book.

Mastema's gateway record archives.
Add a photo to this gallery
Retrieved from "https://soulcartel.fandom.com/wiki/Mastema?oldid=6085"
Community content is available under CC-BY-SA unless otherwise noted.