Gilgath (formerly known as Valtje Almedihar)  is a member of the Vampire race, and was previously inhabiting the body of a demon in order to infiltrate the demon society with his brother in order to retrieve their Vampire body parts which were taken from them. He was known to be the mentor of Nigul.

Gilgath comes up as a strong and comfident man. Handsome mature features with a serious look. He is seen wearing a bit ragged brown long coat usually.

As a vampire, he appears as a handsome person with long sliver hair, golden eyes with pale skin. He is seen wearing a purple noble clothes with a cape to quote his status as the leader of the vampire.

After he reclaimed his vampire body, his younger brother noted that he had remorse for failing to save his people.

In the demon false body, before his return to the "true" vampire body, he is noted as a strong opponent as he is seem threaten Milon by just release his manifestation alone. He stated to nearly complete "Hell's Pilgrimage" having fought all 4 Archangels and 4 Archdevils.

Whilst his infiltration to the witch's castle, he was so strong that put Faust, Shi-Hun in high alert. When confront Mephistopheles, he shown no fear but calm and confident when he even introduce himself. Before he could finish his duel, he was forced to temporary retreat as right arm seem to fall apart. After that, he gained the title "Pluto".

Annihilation: A release-type skill he used against Mephistopheles as noted strong enough against the archdevil's crimson flame.

As a vampire, he use blood power to conjure attack as he had a rematch with Mephistopheles in addition he can also use this power to heal and regenerate every single part of the body including the heart as note by his younger brother-Xerheart.

Metal Blood: Summon a massive quantity of blood to regenerate the body.

Summon Blood Brother Clone: During his rematch with Mephistopheles, he use blood to summon fallen comrades vampire as note by Mephisto himself. So far, he can summon three fallen vampires as blood clone. 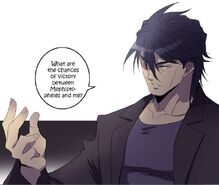 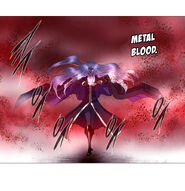 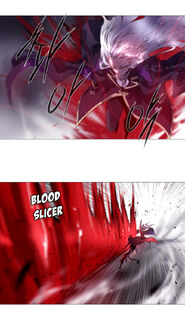 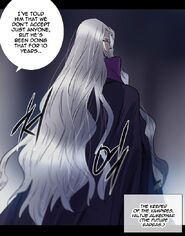 Gilgath in the past as the vampire leader.
Add a photo to this gallery
Retrieved from "https://soulcartel.fandom.com/wiki/Gilgath?oldid=5783"
Community content is available under CC-BY-SA unless otherwise noted.