Gerios is the first fighter from Demon Team 2 in the battle of Koln and an old acquaintance of Minotaurus.

Gerios is a Tall and Heavy built muscular man with Dark Pale skin. He has long spiky orange hair ending at his mid-upper back. He has narrow and feline like amber-colored eyes. He wears a pea-green pelt vest with black shorts ending at his mid thigh. Around his lower torso and just above his waist is a black sash holding his vest in place and revealing his chest. He wears no shoes and his fingers are sharpened, resembling claws.

In his Werelion form, orange spiky hair grows all over the top of his body except his inner face and inner torso. His eyes become sharper and are completely yellow with a small black eclipse within the middle of his eye and his nose becoming flatter.

Gerios is strong enough to defeat all the demons in the Demon tournament and to match Minotaurus' strength while in his human form. In Gerios' Werelion form he is able to completely outperform and defeat Minotaurus (if not for Knuckle) and use Animal Instincts to their fullest. In this form he has extreme speed/reflexes and strength while using his claws to fight. He has a move creating multiple versions of himself using his speed and attacking from all directions known as "Secret Leonine Attack". 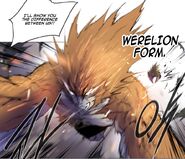 Gerios transformed into his werelion form moving at mach speed]] 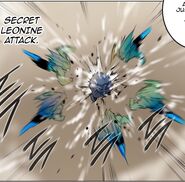 Gerios' "Secret Leonine Attack"
Add a photo to this gallery
Retrieved from "https://soulcartel.fandom.com/wiki/Gerios?oldid=6450"
Community content is available under CC-BY-SA unless otherwise noted.