Cha Su-In is one of the main characters of the series and is the elder sister of the protagonist Shi-un Cha. She took up being a spirit medium after her parents vanished during a mysterious fight with a powerful being from the underworld. After a failed attempt to rescue them from the Underworld a few years ago, she was quietly doing her job guiding spirits to the next world when she came to know that her brother had gotten into a contract with the Archdevil Mephisto and would have to go the underworld. Upon hearing this, she decided to come along to protect her brother.

She is young and beautiful with long purple hair. She is fairly tall and has long legs as described by Mephisto. She usually wears short skirts or frauks with a blouse and a top. After six months her hair has grown considerably longer, she now wears a black dress covered by a white blouse and tall black female combat boots.

Su-In appears a stoic, self-confident individual that hardly laughs or smiles. She is quick to assess situations and doesn't like to complain, although she takes a different stance when dealing with her younger brother, whom she always complains about. She is not afraid to show her anger when he does something wrong and is quite ruthless in doing that as well. She is also quite calculating and calm during her fights. She is also cares deeply for all souls as spirit medium, especially shown in chapter 145 where she sacrifices her powers to save the souls trapped inside demon Kadiran.

She is known as one of the strongest spirit mediums in the world. While most beings are only capable of uitlising one element, Su-in is able to use all 5 of the elements through great effort and study. She fights using elementally charged talismans to attack, and creates different attacks through different combinations of different talismans to fit the situation, making her very versatile and flexible in a fight. However, as of chapter 145, as a result of taking in 300 souls directly into her body during the fight with demon Kadiran, Su-In completely lost her powers as a Spirit Medium.

After losing her powers as a Spirit Medium and the death of Cynthia, Su-in entered a contract with Archangel Michael in order to gain the power to use the latter's holy powers

As of chapter 145, as a result of taking in 300 souls directly into her body during the fight with demon Kadiran, Su-In completely lost her powers as a Spirit Medium.

Talismans: Su-in was able to manifest her spiritual power in the form of elementally charged talismans which in the early chapters of the story, is her main form of attack, which is able to use to great efficiency.

Before entering Hell with Shi-Hun in the early part of the story, she is able to cast powerful spells such as teleportation and etc, but only after ardous and careful preparation and having the need of objects of power to boost her own power to cast the spell. After training with the witches, however, she gained the ability to use pentagram spells, allowing to cast her more powerful spells without the usual long preparations she normally has to make before casting. 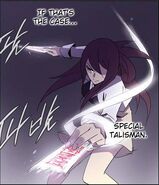 Su-in Cha using her special talisman against the Supreme Witch

Su-In using Holy Powers as a result of Michael's contract.

Su-In creating a Holy Water Talisman
Add a photo to this gallery
Retrieved from "https://soulcartel.fandom.com/wiki/Cha_Su-In?oldid=6357"
Community content is available under CC-BY-SA unless otherwise noted.