Cha Shi-Hun is the Apache protagonist of the series. He is the younger sibling of Cha Su-In, and has inherited medium powers from his parents. Currently in the series, he is solely travelling to find the mysterious creature that abducted his parents and save them. He has left Sodum Prison. He is currently inside Pluto's Gabramelek world.

Shi-Hun Cha is fairly tall. He has large spiky reddish-brown hair with a few large strands hanging over his forehead. He has pale skin and large light brown eyes with thin black eyebrows. He can usually be seen wearing his blue hoodie with a pair of jeans and a pair of all white basketball sneakers. Although when not wearing his hoodie he sports a plain white T shirt.

After six months has passed, he is now considerably taller, taller than Cha Su-In, he now wears a white short-sleeved t-shirt with a pair of blue jeans and a pair of black combat boots with a blue and white jacket.

Shi-Hun is very caring of the weak, he also doesn't forgive those who harm his friends and family. He's headstrong and determined, refusing to give up in the face of danger.

He has shown exceptional advancement by gaining a special move known as the 3rd hand, a super punch which is strong enough to take on an A-class mein namely Nigul. After six months worth of training he has grown tremendously powerful capable of dodging all of Mephisto's attack and even catching him when he is in his sealed state, his true skills are currently unknown. Although through training with Heros he has acquired new abilities as well as mastery of his former abilities. Like Faust Shinoon has been stated as a human of transcendence when it comes to imporvement with each fight and battle talent.

3rd Hand: The third hand is is the most basic of skills for spirit mediums, Emission. Due to the extraordinary amounts of spiritual energy Si-hun has the skill advanced to such a state that when it is released it looks like a third hand, hence it's name. An aftereffect of using 3rd Hand when first discovered is being unable to move for three minutes. Through training with Airen at the Witches Castle along with a Training Talisman being equipped to him to enhance his spiritual powers, Si-Hun managed to not only lower the time of this disability but also became able to move around during the period after using this ability.

Manifestation: After six months of training Shiooon has learned how to use his soul energy as an aura that increases his already impressive abilities and shield him from danger. He can redirect this enrgy to other parts of his body if need be.

Annihilation: After seeing the battle between Gilgath and Mephisto, Si-Hun copied Gilgath's move Annihilation which after he used was strong enough to blow back a serious Beelzebub. However, much like 3rd Hand this ability has a detrimental effect only on a much larger scale. This ability takes a huge toll on the body and without the Witches healing potions Si-hun as stated by Faust would've died and if Si-hun ever used that ability again, he would.\

Afterimage Movement: After his further training with Mephsito and Heroes he was capable of moving in the form of afterimages to blitz his opponents. While most afterimage is lineair in motion Shioon's "running water movement" makes his movements circular and much harder to predict.

Regeneration: Before fighting Gairon, Shi-Hun made a contract with Mephisto to get greater power. The power he recieved was regeneration, and the price being he has to fight the Archdevil whenever he feels like it. The move is very helpful, especially in the case of Annihilation, which he can use multiple times now without weakining his body. His whole body can be healed, however, he still feels pain when a blow hits him. The downside to this is he can only regenerate when his heart is intact, and the time it takes to regenerate (roughly 3 seconds). However it if currently unknown if he still possesses this power, as his heart was sacrificed and later replaced with an azreal heart. He was shown displaying regeneration in chapter 205 against the Pluto Bermut 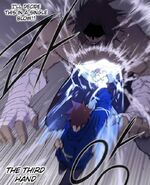 Si-un training with the Witch Airen

Si-hun blowing back Beelzebub with his Annihilation

Shihoon's childhood.
Add a photo to this gallery
Retrieved from "https://soulcartel.fandom.com/wiki/Cha_Shi-Hun?oldid=6481"
Community content is available under CC-BY-SA unless otherwise noted.