Astaroth was introduced in Chapter 176. She is the fourth and final Archdevil to be introduced and calls herself the Mother of Devils.

She appears as a tall, beautiful devil with long black hair and blunt bangs, purple eyes along with head-down silver horns grown from the temple. She wears a high-collar sleeveless plunging V-neck short black dress with a long black trench behind and a pair of black stripy wedge high-heels. In addition, she polishes the black color to her fingernails and toenails.

In her first appearance in chapter 176, she is seem to have a neutral relationship with her brothers. In the event of the new devil underling's birth, she seems cheerful.

She is calm, confident and calculous being who will do everything to ensure the devil race stand on top, as shown in chapter 193, she tried to take over the Azrael 1st base - the bridge that link Hell and Purgatory, in order to reach Heaven and plant a second incubator to create more devil underling to serve her and her brothers.

However, her over-confidence tends to leave her underestimating her opponents in which case is Gabriel as she failed to foresee Gabriel planted the Great Tree seed.

Much like her brothers, Astaroth has a central desire to prolong and strength the demon race given her motherly nature to those she has created.

She is one of the four Archdevils, making her the most powerful being in existence. In addition, she is also capable of utilizing the Darkness attribute. 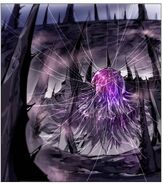 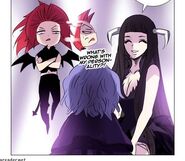 Mephisto and Astaroth talking to Felix. 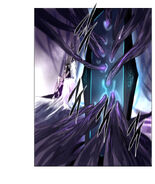 Astaroth on pair with Gabriel. 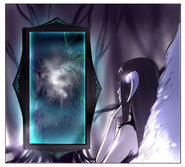 Astaroth control the tentacles via Mastema's gateway.
Add a photo to this gallery
Retrieved from "https://soulcartel.fandom.com/wiki/Astaroth?oldid=6453"
Community content is available under CC-BY-SA unless otherwise noted.